“Behind Every Successful Small Business, There’s a Family”

And the Shafer family takes that business seriously! Mike and Sheree Shafer’s oldest son Sean went on his first service call hours after being born, on the family’s way home from the hospital! Their modest beginnings, decades of hard work and dedication to their craft exemplify what makes theirs a classic American success story.

After joining the Navy Reserves and enrolling in Connelley Trade School, Mike Shafer founded Shafer’s HVAC in 1973 out of his basement. He married Sheree in 1975, and the two of them started a family.

Continuing to work hard, they were soon ready to expand the business. On Mother’s Day 1983, the Shafer’s drove past their new location at 406 Union Avenue in Kittanning, PA. Their youngest son Brady shouted, “That’s Dad’s new office!” This was news to Sheree, who arched an eyebrow at her husband. “Happy Mother’s Day,” Mike said, smiling weakly.

As the years went by, their oldest son Sean took a keen interest in the family business, helping his father on service calls throughout the region. After graduating high school, Sean received an A.S. in business and completed the HVAC program at Triangle Technical School in Pittsburgh.

Sean then went on to become president of the company in 2016 so his Mom & Dad could enjoy more time on their boat. Shafer’s HVAC has grown to include 17 employees and a fleet of 13 vehicles, serving the heating and air conditioning needs of customers throughout Armstrong, Allegheny, Butler, Indiana and Westmoreland Counties. 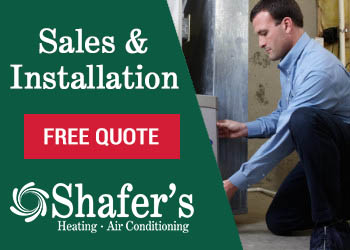